I remember the day I saw my first CCS catalog. It was about 1995, I was 11 years old and looking for some place to fit in. CCS was filled with skateboards, clothing, and everything in-between. It was a world I knew nothing about at the time, but somehow it made so much sense to me as soon as I opened that catalog. I was hooked, forever and ever...sorry mom. I feel really fortunate I grew up in the era before smartphones - and I know how that sounds -but there really was a magic back then to life that just doesn't exist anymore. Maybe I'm just whining because I really miss the 90's...
I got my first skateboard for Christmas that year (Birdhouse/Andrew Reynolds with a rabbit graphic) and that's how it happened. Almost immediately I had like three friends, which is three more than I had before. Skateboarding became a way for me to communicate with people and it turned my life around in a positive direction. I was getting stoked on learning new tricks, learning about tons of new bands through skateboard videos, and making friends at an alarming rate.
One of the greatest benefits of skateboarding was learning about photography. When you bought a skateboard magazine (and I'm hoping this rings true for kids today as well), it wasn't just something you'd look at and then just throw away. It was like a bible, a work of art to be cherished, something that held all of the secrets! The more I got into skateboarding, the more I appreciated what it took to be a good skateboard photographer.
Grant Brittain started taking pictures in 1979 at the Del Mar Skate Ranch where he was working. He borrowed his roommates camera and started documenting friends, locals, and visiting pros. In 1983, he was asked to contribute skate photos to the premiere issue of TransWorld Skateboarding Magazine and became its founding Photo Editor and Senior Photographer. For the next 20 years, he would help the publication grow into the most popular magazine in the world and create some of the most iconic images in skateboarding photography. Towards the end of 2003, he left TransWorld with some of his peers and went on to start The Skateboard Mag, where he is currently the Production Manager and Senior Photographer.

"THERE WERE ONLY FOUR SKATE PHOTOGRAPHERS WHEN I STARTED"


What does the "J" stand for in J. Grant Brittain?
Jenius? Actually Jordan.

How long have you been taking photographs professionally and what is your educational background? Do you feel having an education in photography is important?
I started shooting at Del Mar Skate Ranch in 1979. Got a couple of photos in Thrasher in the early 80's. Helped found TransWorld in 1983...so 1983. I was an art major at Palomar Jr. College and then after I printed a skate photo in the darkroom I changed over to the photography department and took almost every class from 1981-1983. Photography education is helpful, but I don't think anyone shooting skate photos gets asked for their college transcripts. School is a fast way to learn a lot about photography though, makes you well rounded in all of the photographic disciplines.

What are some ways you stay inspired?
I read a lot of books and magazines, study photographic history, go to lectures, see photo shows, take photographic workshops, check out blogs, etc. Other people’s work keeps me inspired and on my toes.

What masters of photography were you influenced by?
I started shooting Skateboarding first, so did the skate photographers that came before me; Stecyk, Bolster, Goodrich, Terebonne, Friedman, Sharp and Cassimus. When I started photography in school, I took a photo history and a contemporary photo class that allowed me to develop a style and start thinking about photography as an artform. I was exposed to Ralph Gibson, Walker Evans, Man Ray, the Bauhaus, Avedon, Henri-Cartier Bresson, Ansel Adams, the Westons, Meatyard, Irving Penn, the list is endless. I still look at their work and am amazed at their vision.

Is there a young skate photographer out there right now you've noticed who's doing it completely different and just standing out artistically?
I think Anthony Acosta is one of the best out there, he does beautiful photography.

Can you think of a photographer who you've recently discovered and were really influenced by their work?
I took a workshop ten years ago with Keith Carter, and to me he's the best fine art photographer in the United States. I've taken two workshops from him. He's an inspiring guy and a true classic artist. He is a teacher and a super friendly guy...watch him online.

What is one of your favorite collaborations you've done in the past or will do in the future? Are there any personal projects you're working on you could share with us?
My friend Mike Farber helped me fund my 20x24 Polaroid project in 2003. We flew to San Francisco and used the 20x24 Polaroid camera with Tracy Storer and shot portraits of the local pro skaters and did 20x24 Polaroid Transfers. Pretty Rad. I am also doing things with my friend Josh Higgins, he is a designer and does amazing work in the design and graphics world. He was Design Director of the latest Obama campaign and just took the job as Design Director at Facebook. Josh designed my website and we have done some shows together. I am trying to work on a coffee table book, but that is slow goin’.

Who is one of your favorite non-photography artists?
I love art. In high school I was looking at a lot of Andrew Wyeth and Rick Griffin. Robert Rauschenberg and Jasper Johns turned me on in art class. In college, my wife turned me on to Marcel Duchamp. They really opened my eyes wide and I realized that art is limitless. When I got into photography I was also exposed to The Bauhaus and Man Ray and I liked how they mixed art and industry together. Then doing magazines I got more and more into type and design.

What is currently in your camera bag?
I shoot skating with the Canon 5D Mark II...I don't spend a lot on new gear. I would if I had the money, but I don't. I use Quantum Q-flashes and Pocket Wizard slaves. I have the newer Pocket Wizard transmitter, so I can shoot at 1/500th and faster. I use my Hasselblad and Leica for my art stuff. I'll never stop using them.

What's one of your favorite cameras?
I love my Leica M6, it's what I always wanted and I have it.

Could you elaborate a bit on your process when you're taking a portrait?
I just think that a portrait should say something about the person or tell a story. If a person has an interesting face, that can carry a photo, say a Lance Mountain or Duane Peters. It helps to have a relationship with the person, it’s awkward shooting portraits, it’s invasive. However, that being said, I have shot portraits of people who I knew and the portraits were terrible. Hit or miss I guess. I like environmental available light portraits the best, but in the studio I like a gridded soft box. 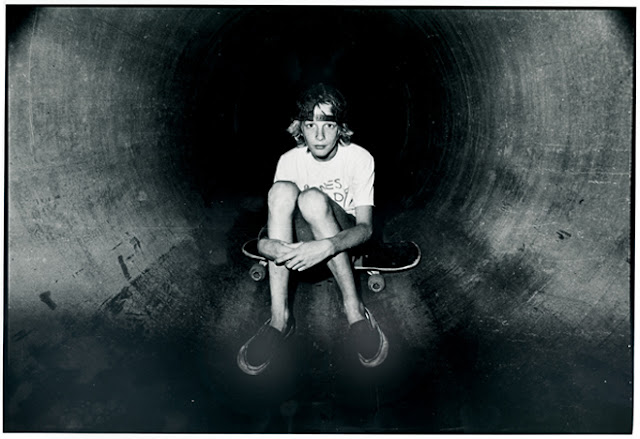 What do you think film photography can teach the younger generations?
I don’t think it matters really what you shoot, film or digital. I love film. I like the craft that goes into making analog photos, but in the end it’s all digital. Most young people have never shot film, I think shooting film teaches a person about photography and seeing. It slows you down and you become more involved in the process.

How has your photography evolved over the years? Is it pretty much the same process, do you light things a bit differently now?
Once I learned about lighting in the 80's, I pretty much shoot the same as I did back then. I shoot pretty simply with just a little bit of gear.

What three images do you consider to be the best you've taken throughout your career as a professional skateboard photographer?


1. Chris Miller, "Pole Cam" because it's just a different kind of shot.

3. Tod Swank, "Pushing" was so artsy and the first time a non-peak action shot was on a cover of our skate mag.


Who are some music photographers you look up to?
Jim Marshall and William Claxton - those classic jazz and rock black and whites are wonderful. I met Jim at his slideshow just before he passed away, what a character!

Do you own any prints from other photographers? What is one your most fond of?
I bought a Keith Carter. It's the dancing bear one, always thought it was funny. He wasn't surprised when I bought it.

How was it being photographed by Tim Mantoani for his "Behind Photographs Project"?
It's an honor to be included in Tim's project, we had that connection of both having used the giant Polaroid camera. He owns his though.

What was the most dangerous place you've ever had to get into to get a photograph?
Shooting my wife in labor...twice.

What's the craziest skateboarding trick you've had the opportunity to witness and document?
Danny Way jumping the Great Wall of China.

Is there a photograph you regret missing?
The loop with Tony Hawk in Tijuana Bull ring. I was in Europe at the time.

Where do you stand on pushing mongo? When you used to skate more, what was the best trick in your bag?
I learned Mongo, it's ugly. I made both of my kids push normal. I could do an ollie on a bank.

Does anyone in your family take photographs? What do they enjoy shooting?
My grandfather was a hobbyist. My daughter shoots Holga. My son is a skate filmer. My wife shoots product for her Etsy shop.

How important would you say perseverance is for a photographer?
It's the key factor. This is the only thing I have ever stuck with in my life. In today's competitive world, it's the only way to succeed. There were only four skate photographers when I started.

There are so many photographers these days, what do you think it takes to stand out?
I would be trying new things, like large format. All skate photos look basically the same, so make it different somehow. I would hate to be starting out nowadays.

What are some important lessons you've learned from being a photographer for over 30 years?
Don't throw away bails, people love wipeout photos. Don't drink more than two beers while shooting. Don't turn your back on a skater while shooting.

If you could pull an ideal or a value out of the late 70's and bring it back into society today, what would it be?
Take life slower.

Lastly, do you have any vinyl laying around? What are a few of your favorites and who are you listening to right now?
I kept all of my vinyl. I have several hundred. My wife and daughter collect vinyl too. I've been listening to a lot of Cocteau Twins lately and a lot of Coltrane and Miles too. Brian Eno late at night. 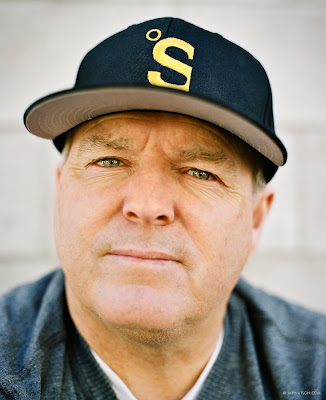